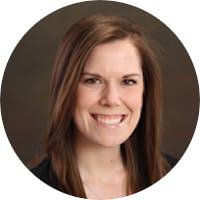 Kerry Briscoe is a staff physical therapist at Premier Physical Therapy and Sports Performance. Kerry holds a Bachelor of Science in Exercise Physiology with a Minor in Business Administration and a Doctorate of Physical Therapy, both of which are from the University of Delaware, whose graduate school of physical therapy is rated second in the nation by U.S. News & World Report’s “America’s Best Graduate Schools.”

During her graduate studies at the University of Delaware, Kerry had the honor of working as a graduate assistant for Dr. Lynn Snyder-Mackler, PT, ATC, Sc.D, SCS, FAPTA assisting in the collection and analysis of both functional testing and questionnaire data for numerous subjects related to multiple randomized clinical trials studying total knee replacement. Kerry is a co-author of the article “Functional Outcomes Following a Novel Rehabilitation Protocol to Promote Symmetrical Loading After Total Knee Arthroplasty” which was presented at the APTA’s Combined Sections Meeting of 2013 in San Diego, California.

A native Delawarean, Kerry is proud to begin her career as a Physical Therapist in her home community, and has a passion for working with both Orthopedic and Pediatric populations. She is excited to explore future career options, including clinical specializations and becoming a clinical instructor, under the mentoring and guidance of her colleagues at Premier Physical Therapy and Sports Performance.

Kerry enjoys spending time with her family and playing in recreational volleyball leagues in the MOT area. She is especially looking forward to her wedding in May of 2013, and afterwards, moving with her fiancé to their new home in Townsend.