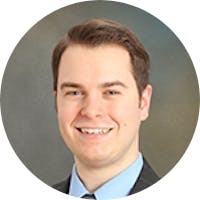 Kiefer Gooch is a Staff Physical Therapist at Premier Physical Therapy and Sports Performance in Dover, DE. In December of 2014, Kiefer earned his Doctorate of Physical Therapy degree at the University of Delaware, whose program is ranked second in the nation by U.S. News and World Report’s “America’s Best Graduate Schools”. He completed clinical rotations in the University of Delaware’s Sports and Orthopaedic Physical Therapy Clinic and Neurologic and Older Adult Physical Therapy Clinic with APTA-credentialed clinical instructors. He also had the opportunity to complete a 10-week clinical internship in Birmingham, AL at Champion Sports Medicine where he treated patients of all ages with various orthopaedic and sports injuries, as well as those following shoulder, elbow, hip, knee, and ankle surgeries.

During his tenure at the University of Delaware, Kiefer earned two other degrees including his Master of Science in Anatomy and Clinical Health Science by investigating the anatomical and biomechanical aspects of Tommy John injuries in baseball players through cadaveric dissection. He also holds his Bachelor of Science in Athletic Training and became a NATA Board Certified Athletic Trainer in May 2012. Kiefer logged over two thousand clinical hours with numerous University of Delaware sports teams including football, track & field, women’s basketball, and men’s lacrosse. He spent two summers interning with NFL teams including the Buffalo Bills in 2010 and Washington Redskins in 2011. Kiefer spent two years as an Assistant Athletic Trainer for UD’s Men Ice Hockey Team from 2012-2014.

In 2008, Kiefer graduated from Caesar Rodney and was a part of the CR Baseball Team, CR Band, and National Honor Society. As a native Dover area resident, Kiefer is excited to give back to his community by providing rehabilitative care to his fellow Delawarians as part of the Premier Physical Therapy Team. He aspires to advance his clinical education while at Premier so that he may continue to provide the best treatment to his patients.

In his spare time, Kiefer enjoys traveling, geocaching, and watching baseball. He particularly likes going to Baltimore to attend Orioles games with his friends and family.